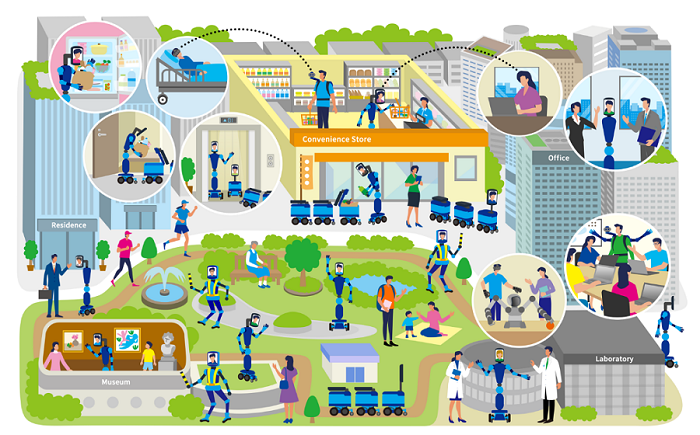 Next-generation avatar robots are expected to play a central role in situations where autonomous robots have barriers to safe and cost effective deployment, and where it is difficult for people to perform physical tasks. Along with telepresence technology, next generation remote control robots are expected to be used in various situations of everyday life, for example, in offices, stores, and homes.

In order to accelerate the deployment of avatar robots to meet various societal needs, Sony AI and avatarin will bring together their respective expertise, including Sony AI's machine learning and robotics technology and Sony Group's sensing and actuator device technology, and avatarin's remote-controlled robot technology, platform, and numerous use-case test results. Through this collaboration, Sony AI and avatarin will jointly investigate the development and deployment of next-generation avatar robots that are easy for anyone to use.

"Avatars or remote-controlled robots enable many types of work and communication without the physical presence of humans. For the full scale deployment of avatars, we need to combine a wide range of technologies such as robotics, sensors, AI, user interaction, and high-speed communication networks, in addition to the fleet management and service management knowhow to operate avatar fleets consistently and reliably. It is also expected that there will be an increasing demand for various remote robotic solutions that can perform physical tasks, especially in high-risk environments and situations where human contact and movement are restricted. Through collaboration with avatarin, Sony AI aims to establish a new social foundation for avatars and raise the level of social life."

"From its humble beginnings as a small, private company with just two helicopters, ANA has been unwaivering in its pursuit to connect people around the world for the betterment of society. ANA has since grown to become Japan's largest airline, but we realized that the global airline industry currently only transports about 6% of the world's population on a yearly basis. avatarin and its robotic avatar platform is ANA's solution to connecting more of the world's population instantaneously and effortlessly. This is a platform that will enable anyone to connect with remote, real-world avatar systems to transport their senses, consciousness, and skills to anywhere in the world. avatarin, together with Sony AI, aims to accelerate development of versatile robotic avatars that can be deployed globally to create the world's newest infrastructure that will allow all of us to share our skills and support one another like never before."

Sony AI was founded on April 1, 2020, with the mission to "unleash human imagination and creativity with AI." Sony AI combines Sony Group's imaging and sensing technology, robotics technology, and entertainment assets such as movies, music, and games to transform with cutting edge Artificial Intelligence R&D to accelerate all of Sony's business areas and create new business opportunities. To achieve this, Sony AI has launched three flagship projects aimed at the evolution and application of AI technology in the areas of "game," "imaging & sensing," and "gastronomy." Sony AI also plans to combine AI and robotics technologies to tackle various social and global issues. Sony AI will promote various exploratory research related to these flagship projects and other important themes, including AI ethics, in the physical and virtual worlds.

avatarin was established on April 1, 2020 with a mission "to exand humanity's potential by offering new abilities through avatars." A spin-out of ANA Holdings Inc., avatarin is focused on developing a next-generation mobility and human augmentation platform that will enable people to instantaneously transport their consciousness, skills and presence to remote locations using robotic avatar systems. They launched the world's first avatar platform "avatarin"that can be used to search, reserve, and connect to avatars deployed around the world from their dedicated application. avatarin is also accelerating the development of avatar robotics technology as the sponsor of the ongoing "ANA AVATAR XPRIZE" which was launched with the XPRIZE Foundation in 2018.

THE PRESS RELEASES ON THIS WEBSITE ARE PROVIDED FOR HISTORICAL REFERENCE PURPOSES ONLY.
PLEASE NOTE THAT CERTAIN INFORMATION MAY HAVE CHANGED SINCE THE DATE OF RELEASE.